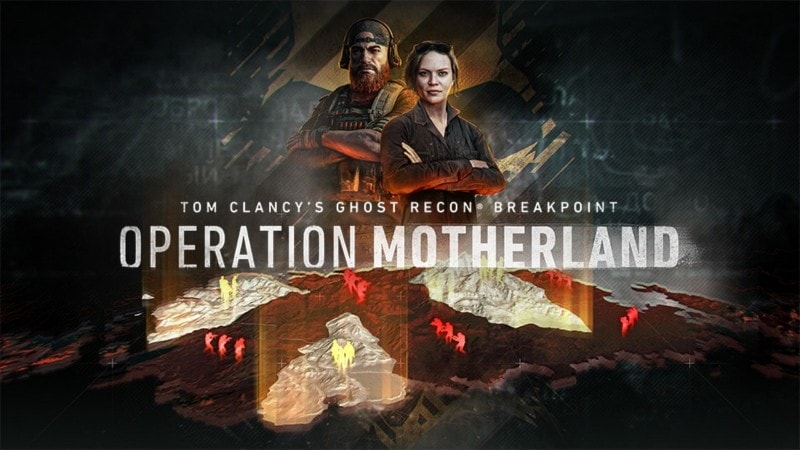 That ammo is called Operation Motherland, and it’s basically a brand new campaign for Breakpoint coming out November 2. Set a few months after the end of the original story, Nomad is no longer on Auroa but now the island has become a strategic target for multiple countries interested in making it their own.

“The CIA aims to ease global tensions by giving the power on the island to a neutral force – Ito and the Outcasts – turning Auroa into an autonomous country,” Ubisoft’s blog post about the new campaign reads. “This operation, led by Karen Bowman, is called Motherland.”

At the heart of Motherland is the new Conquest mode. Described as an alternative to Breakpoint’s story mode, Conquest has an emphasis on player actions and the subsequent consequences on Auroa. There will be a variety of missions to choose from that include objectives like destroying things, securing enemy camps, stealing vehicles, taking out one of the four Bodark lieutenants, and more. The further players progress through Motherland, the more free Auroa will be of the Bodarks.

Speaking of the Bodarks, Ubisoft says, “they are ruthless infiltrators and manipulators, allied to Sentinel and Wolves,” and that five enemy archetypes will be present in both enemy encampments and the wilds of Auroa.

“Each type of Bodark enemy will have equipment that changes based on the highland, urban, and wild biomes,” the blog post reads. “Players will notice new Russian weapons and vehicle skins on the Bodark faction. Players will also be able to get kitted out with new items in Maria’s Shop, including a Mixed Materials Ghillie Outfit, so their own options will increase along with the Bodarks’.”

To coincide with Motherland, Auroa will undergo some atmospheric changes. More specifically, it will be divided into five different zones, with an overall autumn and winter feel. Cloudiness, rain, fog conditions, and sunniness will be more varied around the island, too, according to Ubisoft. New insects, fumes, grasses, and bird flight patterns have been added as well.

“As players conquer Auroa, the Outcast presence will increase in the wild and in encampments, making faction warfare more frequent,” the blog post says. “You’ll notice road checkpoints, convoys, hostage situations, and patrols fill the island based on faction presence. These events will vary in difficultly according to their respective regions – be sure to check your TacMap to find more details on each region’s challenges.”

Motherland will bring Optical Camo into the game alongside its new progression system. The Optical Camo functions with a gauge system that starts at 100 and decreases over time (and based on actions made by the player). This camo allows you to be invisible to enemies and it can be upgraded to last longer and remain efficient over further differences.

The maximum XP level has been increased to 99 to account for the extra content being added to Breakpoint. Skill points can now be used to increase weapon mastery and focus on a preferred playstyle, too.

Will you be jumping into Operation Motherland? Let us know in the comments below!