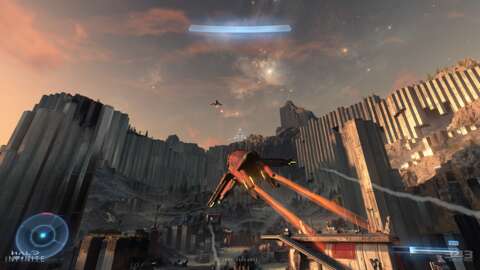 Halo Infinite developer 343 Industries is finally sharing more details on the game’s campaign, and this kicked off in a big way with a brand-new campaign demo on Monday (watch it again below). Another video focused on Escharum was released on Tuesday, and now even more insight on the campaign has come to light. In a blog post, 343 teased out more of what to expect from Halo Infinite’s story.

Set on Zeta Halo AKA Installation 07, Halo Infinite sees players tracking down the Banished across a variety of locations in an open-ended structure. But why have the Banished taken over Zeta Halo? And who is the new enemy, the Harbinger? These mysteries and more may be at the heart of Halo Infinite’s story.

“Our beloved old Installation 07 has always been rife with intrigue and importance within the larger Halo narrative, but if you think you can’t teach an old ring new tricks, you might be in for a surprise or two,” 343 said. “The Banished have hold of the installation and are trying to make it their own, though to what end–and for what reason–remains unknown. One thing is certain: they aren’t going down without a fight. And speaking of unknowns, we also got our first look at the Harbinger. We don’t have a lot to say about this curious character at the moment, but I will give you this: They’re definitely not a Prelate.”

Prelates are, according to Halo lore, supersoldiers that fight for the Covenant.

343 said it will have more to reveal about Halo Infinite’s campaign and its “enigmatic narrative threads” in the lead-up to launch in December. A pair of new screenshots were released, too.

Halo Infinite’s campaign calls on players to travel through the map and clear out Banished enemies who have taken hold of UNSC bases. It appears players can move through the campaign at their own pace and go where they want to, as opposed to the more strictly linear campaigns of early games. 343 said, “Oh, and make sure you take back every UNSC Forward Operating Base you can. Rumor has it they have stories to tell…”

After a lengthy delay, Halo Infinite launches on December 8 for PC, Xbox One, and Xbox Series X|S through Game Pass. The multiplayer element is a free-to-play standalone game. There won’t be campaign co-op until 2022, and Forge is coming after launch as well.