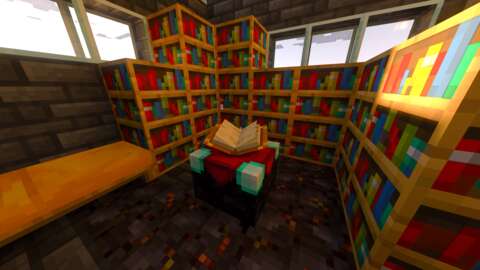 Note: This guide focuses on the Bedrock version of Minecraft, available on Windows 10, Xbox, PlayStation, Switch, and mobile.

Check out the rest of our guides on Minecraft enchantment to help you get the most out of all your gear:

How Enchanting Works In Minecraft

Aqua Affinity – Increases underwater mining speed. Depth Strider I – III – Reduces slowdown caused by being in water by 1/3 per level.Feather Falling I – IV – Reduces fall damage by 12% per level.Protection I – IV – Reduces most types of damage by 4% per level, with a one-level bonus for Protection IV, for a total of 20% per piece, up to 80% damage reduction total.Respiration I – III – Extends underwater breathing time by 15 seconds per enchantment level.Unbreaking I – III – Reduces the frequency with which items degrade when used.

Channeling I – III – Channels a bolt of lightning toward an entity–hostile mob, farm animal, villager. Only works during thunderstorms, and only outdoors.Fire Aspect I – II – Sets the target on fire.Flame – Arrows from an enchanted bow set the target on fire; can also ignite TNT.Infinity – Firing consumes no regular arrows (does not apply to other arrow types).Knockback I – II – Knocks target back 3 blocks per level.Looting I – III – Increases the drop rate and frequency for many mobs.Loyalty I – III – Trident returns when thrown, like Thor’s hammer. Higher levels make it return faster.Power – I – IV – Increases arrow damage.Punch I – II – Increases arrow knockback.Riptide I – III – Trident pulls the player with it when thrown in water or rain (also like Mjolnir!).Sharpness I – V – Increases damage with axes and swords.Unbreaking I – III – Reduces the frequency with which items degrade when used.

Luck of the Sea – Increases the rate of good loot when fishing.Lure – Decreases wait time until a fish bites or loot is hooked.

(See our guide on Fishing Your Way to Success in Minecraft for more details!)

Bane of Arthropods – Increases damage and applies Slowness status effect to spiders, cave spiders, silverfish, endermites, and bees (do not attack bees, you monster).Blast Protection – Reduces explosion damage and knockback.Curse of Binding – Items cannot be removed except by death or the item breaking.Curse of Vanishing – Item disappears upon death.Fire Protection – Reduces fire damage and length of time on fire.Frost Walker – Walk on water by turning it to ice; negate magma block damage.Impaling – Deals additional damage to ocean mobs when applied to a trident. Also works in the rain.Multishot – Shoot three bolts at once from a crossbow for the price of one.Piercing – Crossbow bolts pass through enemies and shields.Projectile Protection – Reduces damage from projectiles such as arrows, ghast fireballs, and more.Quick Charge – Reduces crossbow load time.Smite – Increases damage to undead mobs.Soul Speed – Increases walking speed on Soul Sand and Soul Soil; damages boots over time.Thorns – Reflects damage back at enemy mobs, but reduces durability.

How Enchanting Works In Minecraft