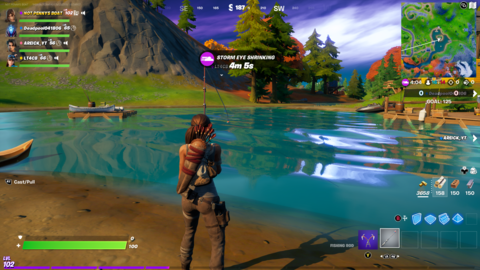 Starting with Chapter 2 in 2019, Fortnite has given players the mechanic of fishing, which continues to evolve and include new benefits all the time. Each new season of Fortnite seems to bring with it not just its own unique array of fish that can be caught and eaten or otherwise used in-game, but most seasons have revealed never-before-seen fish which often tie into the themes of different seasons.

For the most part, Fortnite fish are consumable items that offer buffs to whomever eats them. For example, the Flopper and Shield Fish heal HP and shields respectively, while the Hop Flopper gives its hungry looper a few seconds of low-gravity jumping ability. Some fish, such as the Vendetta Flopper are extremely rare and can instantly ping the nearest enemy when eaten.

For players, filling out the Fish Collection book in-game is one of the many side activities to take part in on the Fortnite island. A typical season of Fortnite will offer 30+ different kinds of fish, including special variants that can only be found in certain places or with special items like the enhanced Pro Fishing Rod.

Each season of Fortnite brings its own pool of fish to catch.

While fishing extensively in the middle of a battle royale match means you’re at risk for being in someone’s crosshairs soon enough, a quick trip to the various ponds, Lazy Lake, or the enveloping oceans can give you a critical item just when you need it most. These include healing fish when you’re low on HP, a Shadow Flopper which can help you briefly go invisible, and many more as you can see below.

Purple and orangeSilverRavenGreenRed and green

Effect: acts as proximity mine

Effect: Does area-of-effect stink bomb damage when thrown, or heals HP when eaten

Effect: acts as Rift-To-Go, immediately allowing a player to re-drop from the sky