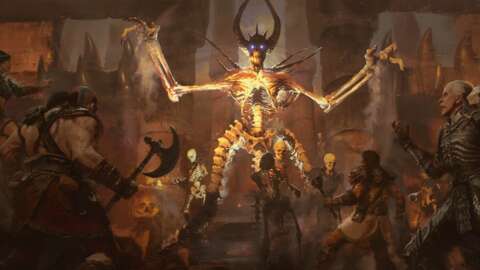 The latest patch for Diablo II: Resurrected will make it more clear when players are, or aren’t, able to create or join a game in the remaster of Blizzard’s classic action RPG.

Patch 11.5 for both PC and console makes it so that there is now in-game messaging regarding how much time is left before a player can create or join another game. Additionally, players who attempt to join a game that is full will now be able to immediately join another game, rather than having to wait. The new update also adjusts the rate at which players can join and create games based on current server capacity.

Rapidly joining and creating games has been a problem for Diablo II: Resurrected, causing Blizzard to implement limits on how quickly it can be done. Since the game is largely based on the original’s code, it wasn’t designed for the playstyle of modern Diablo fans, who rapidly create games to quickly farm one particular enemy or spot, before abandoning the game shortly after and then creating another. That method of playing has overwhelmed Diablo II: Resurrected’s databases, leading Blizzard to put restrictions on how rapidly games can be created or joined.

The game has suffered from ongoing stability issues, with servers going offline multiple times following launch. Blizzard introduced a login queue during times of busy server activity to prevent that from happening again.

Diablo IV, the next game in the series, was recently delayed during an Activision Blizzard investor call. Though the game didn’t have an exact release date or even release window, it seems fans will have to wait even longer now to return to Sanctuary. Below are the full patch notes for Diablo 2: Resurrected update 11.5.

A new patch will be available this morning for PC.

To report a PC bug, visit our Bug Report forum 16.

Updated the game client to be able to scale the rate at which players can join and create games based on server capacity added in-game messaging to communicate how much time is left before a player can join or create another game added join/create game rate refunding so that if a player joins a game that is full, in addition to other cases, they will now be able to immediately try to join another game rather than being limited