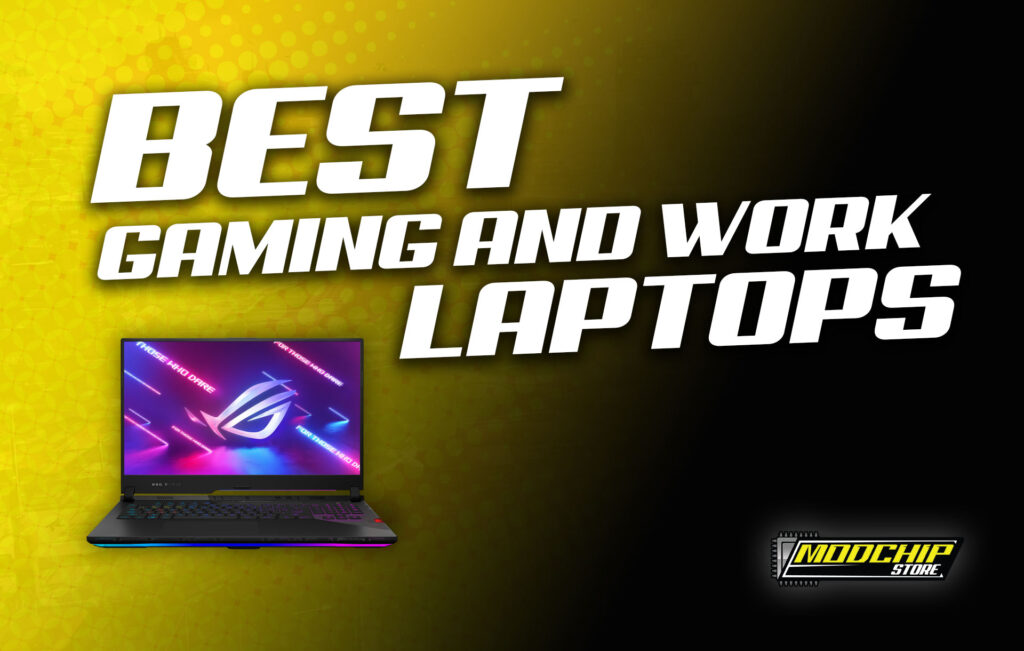 What to consider when choosing a game and work laptop

Choosing the best gaming and work laptop is not all that easy. But you can use the following criteria to narrow down your list of potential options.

But with so many devices and models in the market, what’s the best option?

Most laptops have an Apple, Qualcomm, Intel, or AMD CPU, but it’s a two-horse race between AMD and Intel in gaming. This battle is fierce since both CPUs offer serious performance for work and play on laptops.

Generally, Intel has had the better gaming performance over the past decade. Their chips have had excellent frequency speeds, as shown by the ICE Lake CPUs and the more recent but more powerful Tiger Lake H processors. There are also the 10th-gen Intel CPUs based on the Comet Lake design, Core i9, and Core i7 CPUs.

However, the contest isn’t exactly won. AMD has caught up with Intel in recent years and is already toppling its market dominance. Their chips offer better thread counts and generally have more cores, allowing them to excel in work and creative applications. Impressive AMD mobile CPUs that go toe to toe with Intel’s lineup include the Ryzen 4,000 chips, Ryzen 5980HS, Ryzen 9 5900HS, and the recently announced Ryzen 5000 processors.

However, many laptop manufacturers are working with Intel. So you’re more likely to find an Intel processor in the laptop market than AMD. Even then, don’t let the CPU be your only deciding factor when choosing the best gaming and work laptop for your needs. Both brands offer incredible performance, and it is far from night and day between them.

Laptop Processor for Intel Core i3 (10th Gen) vs Ryzen 3

Laptop Processor for Intel Core i5 (10th Gen) vs Ryzen 5

Laptop Processor for Intel Core i7 (10th Gen) vs Ryzen 7

Most modern games are GPU-bound, making GPU one of the biggest considerations you’ll make when choosing a gaming and work laptop. Generally, it’s best to go for a device with a Dedicated GPU rather than one with integrated graphics. And while you can always attach an eGPU, it’s not convenient and beats the whole point of buying a gaming laptop.

Many gaming laptops come with Nvidia GeForce GTX or RTX  GPUs. In fact, the best graphics cards you can find in a notebook are from Nvidia- the  RTX 30-series cards. These include the latest RTX 3080 and last year’s 3070 laptop graphic cards. The 3060 and 3050 series are other impressive laptop GPUs from Nvidia, and if you’re on a budget, you can still get decent performance from the 3040 and 3030 series.

Note that Nvidia uses an innovative graphic cards technology known as Max-Q in some notebooks. This tech allows the rendering power of the company’s desktop GPUs to fit in the small form factor of mainstream laptops.

Screen size is important to your work and gaming experience. The larger the screen, the more immersive your gaming sessions will be. Also, projects like video editing, graphics design, animation, and image editing need bigger screens.

Twelve to fourteen inches is the sweet spot for a work laptop, while a 15-inch screen is big enough for an immersive gaming experience. So, a 14” or 15” laptop should be a great fit for both your gaming and work endeavors.

If you lean more on the gaming side of things, there are models with up to 17 inches of screen real estate.

Other important screen aspects are the resolution and refresh rate. The display’s refresh rate determines how smooth your gameplay and work will flow onscreen. A screen with a high refresh rate feels smoother, faster, and more responsive than one with a lower one. Fortunately, gaming laptop models usually have an excellent rate, with some displays reaching as high as 360 Hz.

Note that there are models with NVidia G-Sync or AMD FreeSync. These technologies sync the laptop’s display with the graphics card, eliminating screen tearing and ghosting when gaming.

Gaming laptops are generally heavy because of the cooling burden imposed by high performance. You may want a bigger laptop, but watch out that the weight isn’t too much to inconvenience portability. A good gaming and work notebook weighs around 4lbs, but if you want something that redefines performance, you should be prepared to carry as much as 7lbs or more.

I have personally owned two 17″ laptops and it is not at all convenient travelling through airports. One year I took a vacation to Mexico and decided to bring a laptop with me in case we wanted to watch some Netflix on a larger screen than our phone. My arm was sore for over a week. Now, this was many years ago and I do know that high-end 17″ laptops have come down in weight but this is something to consider and I would take into deep consideration if you are a traveller. I no longer own a 17″ laptop and now only purchase 15″ because of this experience.

Battery life is more important for work than it is for gaming. So, it shouldn’t really be a huge consideration unless you spend hours off the grid working. In this case, you’ll need a notebook with at least 8 hours of battery life.

For your gaming needs, it’s the power supply’s task to juice the best performance. Any AAA game will drain your battery life in less than an hour or even half an hour. But a game like Minecraft you will have less of an issue when gaming on a laptop battery and should give you many hours of gameplay when not plugged in.

There are several ports in a typical gaming/work laptop. Given the money you’ll be paying to own a gaming notebook, you need to ensure that your model has the latest versions of the ports. These include a USB 3.1 port (s), RJ-45 Ethernet port, SD card reader, and an HDMI 2.1 port.

Other factors include storage, RAM, and keyboard. Generally, the higher the storage and RAM, the better the performance. The best work and gaming laptops come with at least 1 TB of storage, with top-tier devices spotting an SSD over an HDD. However, some gaming laptops have both storage drives, a hard drive, and a smaller SSD serving as a boot drive.

Now that you’re familiar with the criteria, here is our very own selection of the best gaming and work laptops;

Although gaming laptops are expensive, owning an excellent gaming notebook on a budget is still possible. Note that ‘budget’ here is used relative to prices in the gaming laptop market.

Our best pick for this is the Dell G5 15 Gaming Laptop (2020). This $821 notebook has all the features necessary for a good budget gaming and work laptop. For one, it’s powered by a 10th gen Intel Core-i5 quad-core processor with speeds of up to 4.5Ghz. It also has a smooth 120Hz FHD display spread out over a comfortable 15.6 inches of screen space.

The graphics card is an Nvidia GeForce GTX 1650 with 4GB memory, which performs well enough to run even the most demanding games at a constant frame rate.

The title of the best high-end gaming and work laptop goes to the ASUS ROG Strix Scar 17, 2021 model.

The visuals are powered by a dedicated RTX 3080 graphics card  (there’s also an RTX 3070 option) and are enjoyed on a whopping 17.3 inches of screen real estate.

Don’t expect to get god-level performance from these three notebooks, but they do offer a lot for the price.

Laptops that convert into tablets are much cooler when they’re fast and powerful. And in this field, few do that better than the Lenovo Yoga 9i laptop. This impressive notebook is powered by Intel’s 11th gen Core-17 processor and comes with 16GB of high-bandwidth RAM and a  512GB SSD for internal storage.

It has a 14” FHD display and uses Intel Iria Xe graphics to meet gaming, creating, and entertaining tasks. The laptop weighs a comfortable 2.97 lbs, which is great for portability. It costs $1,249.99.

The device runs on Chrome OS, has a 2-in-1 design, and uses Intel UHD Graphics for its graphics.

Dual-screen laptops are not just cool; they also open windows to a whole world of multitasking possibilities (pun intended). In this regard, the laptop that most caught our eyes was the ASUS- ZenBook Duo. The notebook is fast and snappy, thanks to the juice provided by an 11th Gen Intel Core i5 processor.

It has 8GB worth of fast LPDDR4X RAM and a 512GB SSD for internal storage, while the display is a crispy 14” 1920 x 1080 (FHD) display that uses Intel Iris Xe Graphics. The touch screen panel is super responsive and supports the ASUS pen for editing, note-taking, and casual sketching.

Our best gaming and work laptop choice for 2021

All laptops in this list are impressive in their own regard, but our top pick is the ASUS ROG Strix G15 (2021). Going for $1,4999.99, this notebook combines value and performance to give you the best gaming and work laptop available.  It features a 15.6” FHD display with a 300Hz refresh rate, which works seamlessly with the GeForce RTX 3060 (there’s also a 3070 model) and AMD’s Ryzen 9 5900HX processor (4.6 GHz) to offer a smooth gaming experience.

The internal storage is a 512GB PCle NVME SSD, while the RAM stands at 16GB of DDR4 memory. So, there’s no lag whatever during day-to-day use due to the high read (and write) speeds.

Can I use a business laptop as a gaming laptop?

Are gaming laptops good for school?

Yep. Unless you’re in a coding/animation program, school projects aren’t that demanding. So, gaming laptops will work pretty much like any other laptop in a school setting. Plus the extra juice just means you don’t have to worry about your device freezing during deadline-day submissions.

Laptop manufacturers are constantly pushing the limits of laptop technology and changing how we approach work and play. You no longer need to have a desktop computer for working from home or assemble a maxed-out rig for a good gaming experience. All you need is a great laptop, enough desk space, and you’re good to go. In fact, you can use your gaming laptop as your work laptop.