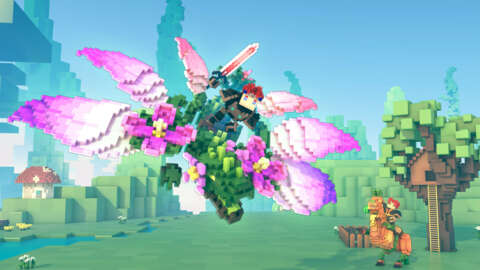 The mark of a truly memorable game can be found in more than just its critical and financial success; it can be seen in how it shapes the landscape around it to inspire other games to follow in its footsteps. Minecraft is a prime example of this idea, as Mojang’s masterpiece (now owned by Microsoft) has been responsible for shaping lives and minds since it first launched in 2009. That success was naturally met with a few flattering imitators over the years, as well as games that were inspired to expand on the genre that Minecraft pioneered, in new and exciting ways.

If you can’t get enough of that blocky Minecraft fun and you’re looking for even more games that run along those lines, then the titles listed below might be worth checking out. We’ve rounded up the best games like Minecraft.

Unlike a number of games that you’ll see on this list, Deep Rock Galactic is all about exploiting the environment and making a hefty profit in the process. Venturing deep into an alien moon, there are resources to collect, salvage jobs to complete, and a planetoid full of creepy insectoid foes hunting you so that you will stop plundering their home, but fortunately you’re always well-armed and ready to fight back so that you can complete a contract.

The other catch though is that light is a limited resource in these caverns, and between all the mining and drinking you’ll be engaged in, you’ll be having a blast with your friends along the way. Both metaphorically and literally.

A creepy and nerve-wracking game of survival, this delightfully devilish title captures Minecraft’s appeal of survival and amps it up with an intelligent grind focused on crafting tools that can help you fend off the nightmares lurking in the dark. The catch here is that due to the limited resources around you, death feels inevitable and every night you survive feels like a small victory before the reality of what awaits you rocks up to blow the wind out of your sails.

A roguelike that looks like it was designed by Tim Burton, Don’t Starve is a nail-biting and challenging experience that walks a tightrope between fleeting victories and inevitable dread.

Dragon Quest Builders 2 doesn’t go to any great lengths to hide its primary inspiration, but beneath the obvious surface are layers of storytelling and RPG action that helps this game establish itself as a uniquely charming adventure. With the world in peril, it’s up to you to fight back against an evil cult that’s gunning for anyone who shows a spark of creativity. The best way to do it? By restoring stability to the land with your own building skills through a sprawling campaign and sidequests.

With its vibrant art style and a relaxing soundtrack from composer Koichi Sugiyama, Dragon Quest Builders 2 is a sandbox of delights, a sequel to a spin-off that builds on its original foundations to create a fascinating new spin on the genre. Dragon Quest Builders 2 is a great pick for those who want a bit more action to complement their building.

Will Minecraft ever get a sequel? Trick question: It already has one, albeit an unofficial game that feels like a genuine upgrade in many of Minecraft’s core ideas. Eco is a connected world of choices and consequences, one where every resource you gather or structure you build has an impact on the environment around you as you work to stop a world-ending meteor from striking the land. From educational reminders of your virtual carbon footprint to multiple modes to try out with other players, Eco may be clearly inspired by Minecraft, but Mojang could learn a thing or two from a game that evolves the craft and create a formula.

With a game inspired by Minecraft–and the IndustrialCraft mod in particular–Factorio is steam-powered 10-more-minutes addiction set on an alien world. The only way to escape is to kickstart your own industrial age, but the hook here is an incredibly complex and lengthy journey to reach the point where your metropolis is a hive of efficient activity. The wildlife around you has other plans though, as your new city begins to consume resources and pollute the planet. That said, with enough managerial skill and an eye for investment, even mother nature won’t be a match for human ingenuity and the march of progress.

Fallout 4 might not strike you as a Minecraft-inspired title, but cast your gaze over to the Settlement system and you’ll see just how deep Mojang;s inspirational roots run. A small part of a much larger number of systems, building your settlement isn’t vital to completing Fallout 4 but it is an entertaining and apocalyptic take on Minecraft’s resource-gathering template that allows for some cunning builds in the aftermath of mutually assured destruction.

Stuck in the middle of a very inhospitable slice of nowhere, The Forest plays like MineCraft if that game’s more dangerous denizens had been replaced by cannibalistic marauders hungry for some fresh flesh. This setup naturally makes The Forest a far creepier affair that you don’t want your kids spending a night with, but the hard-edged survival aspect gives it a unique break from the more family-friendly titles on this list, as you desperately work to build a shelter and weapons to fight back against the mutants hiding amongst the trees.

Minecraft’s genius comes from uncovering and following a specific formula to overcome the challenges around you, an idea that Kerbal Space Program has taken to heart for its space race antics. It’s all about building fully-functional spaceships in this charming sim, which also has a healthy dose of management thrown into the mix. As of August, development on Kerbal Space Program is also complete, meaning that the version you can play right now is the definitive and most educational edition you can get your hands on while work on a sequel steadily moves forward.

It’s only fitting that Lego would venture into Minecraft territory, bringing the comparison between the two mega-powers full circle. While Lego Worlds only had a brief time in the spotlight, what was available during that period was a colorful dip into the Lego toybox that had plenty of charm. As close as you could get to a completely virtual Lego world without having to worry about piercing your heel with a misplaced four-stud block, Lego Worlds was still a fascinating dive into familiar territory with a Danish building block twist.

One of the greatest comeback stories in recent memory, No Man’s Sky captures the thrill of exploration and venturing into the unknown to find something new waiting for you on the other side. The similarities don’t stop there either, as No Man’s Sky features a plethora of space-tools that can be used to construct habitats on alien worlds, albeit without the trademark blocky aesthetic of Minecraft. Having grown in galactic leaps and bounds over the years, No Man’s Sky is a marvel of design that packs an entire universe into a single program.

A massively popular sandbox of pure creativity, Roblox’s appeal comes from its vast collection of editing tools and almost unlimited potential for helping you construct whatever you can imagine. Not only is the game equipped with a suite of tools for construction and deconstruction, but Roblox’s other claim to fame is a massive community that has come together to expand on this virtual world, making for a game that’s far more social than Minecraft’s usually solitary pursuit of creativity.

Like Minecraft, Starbound is a game that delights in giving players infinite space within which to explore its digital reality and clobber anything that gets in your way. Its 2D aesthetic may be diametrically opposed to Minecraft’s three-dimensional tree-punching action, but Starbound checks all the right boxes on its list with crafting, social gaming, and an overall vibe that makes it pure fun to play when you tackle any of its numerous quests.

Stardew Valley regularly crops up on our lists thanks to its versatile and easygoing nature, but as a game of all-encompassing agricultural construction, it’s unmatched along those very specific lines. There’s a green-thumbed joy to seeing your garden flourish, harvesting crops once the seasons have changed, and engaging with the local village, resulting in a game that draws inspiration from Minecraft and other classic titles of the past to create a uniquely lo-fi farming sandbox with plenty of appeals.

Terraria’s world is far more deadly than the landscape of Minecraft, and even though it takes place on a two-dimensional plane, at least you’re never short of options when it comes to fighting back against the assorted terrors looking to ruin your day. Crafting is of course part of the appeal, but Terraria goes a step further with its combat and collecting items that’ll help you survive numerous dungeons and the monsters lurking in the dark.

As of May 2020, Terraria’s final major update was Journey’s End, a fitting finale to a legendary title that’s still as addictive to play as it was when it first launched a decade ago.

Trove’s voxel-powered visuals bear a striking resemblance to Minecraft’s cubic cuteness, but that’s where the major similarities end. An MMO with more blocky angles than a Lego con artist, Trove’s focus is on an adventure, action, and social questing through its world. All your typical RPG goodness is present here, such as epic loot, a collection of hit-sponge meanies to whack about, and dungeons to explore, but with a few neat twists on the formula that makes for an engaging game.