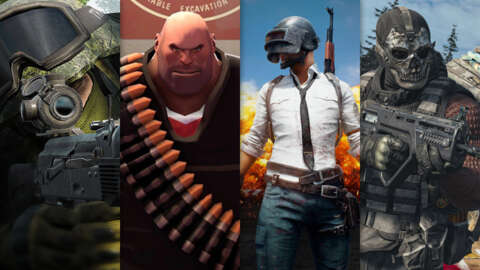 DICE’s Battlefield series returns this November with Battlefield 2042, which takes players to the near future with a US and Russia proxy war raging and natural disasters everywhere. We got our hands on the beta and came away generally impressed. But if Battlefield specifically isn’t your cup of tea, or if you want to try something else in a similar vein, we’re rounding up 10 games that are similar to Battlefield that you might enjoy.

For the purposes of this article, we’re considering a number of Battlefield-like qualities such as enormous maps, chaotic battles, huge player counts, and vehicular combat. Battlefield is not the only show in town, and there are plenty of good, fun games like it that you might enjoy.

Bohemia Interactive’s Arma III bears a number of similarities to Battlefield. It features a massive, sprawling map and is also set in the near future. The game is stacked with a number of realistic-looking weapons and equipment, and it has a wide variety of vehicles, too. Another great thing about Arma III that keeps it fresh and interesting more than seven years after launch is its robust modding community that is seemingly always releasing new content.

If you like Battlefield’s trademark massive maps and huge player counts, 2019’s Call of Duty: Modern Warfare might also appeal to you. In a first for the series, Modern Warfare’s Ground War mode pushed the player cap to 32v32, which put it on par with Battlefield (until 2042, which upped the player count to 128 on new consoles and PC). Ground War is set on some of the biggest maps ever for Call of Duty and Call of Duty’s best-in-class gunplay carries over successfully. Ground War also lets you drive a number of different armored vehicles, just like Battlefield.

One of Battlefield’s biggest competitors in the FPS space is Activision’s Call of Duty series, and the battle royale game Warzone may appeal to Battlefield fans. Warzone has a gigantic map, bigger than anything in Battlefield, featuring many different points of interest and locations to explore in a battle royale last-player-standing setting. There are plenty of vehicles and a great array of varied weapons, items, and equipment that contribute to creating the type of “watercooler” moments that Battlefield is known for. If the standard battle royale game type is not your thing, Warzone also has some modes featuring respawning, too.

Not every mode in Halo might appeal to Battlefield fans, but there is one that could: Big Team Battle. Halo’s largest game type drops players onto the franchise’s biggest maps for a chaotic multiplayer experience that is less white-knuckle than standard Slayer and more social and wacky, where you can almost never predict what will happen. Whether you’re playing a standard Slayer or objective-based mode like Capture the Flag, Halo’s Big Team Battle mode offers some of the zaniest, most frenetic multiplayer the series has to offer. And with a variety of vehicles like Wraiths and Banshees to pilot, combined with excellent shooting and a vast arsenal of weapons and equipment, The Master Chief Collection could be a Battlefield fan’s next fave.

See at Amazon for Xbox One

Developer Black Matter’s World War II shooter Hell Let Loose invites players to duke it out in battles set in the Western Front at places like Carentan, Omaha Beach, and Foy. The game pits two teams of 50 in a battle for control of capture sectors set on sprawling maps. There is a meta-game element, too, as each zone that is captured gives the capturing team a new resource to help capture the next. Hell Let Loose has 14 classes, including recon and assault variations, so players can select the operator that’s best for them. The maps were created using aerial photography and satellite imagery, and the game runs on Unreal Engine 4. Unlike other modern shooters, kill/death ratio is not always the most important element in Hell Let Loose, as players are called on to work together to have the most success.

If you like Battlefield’s large-scale combat, its huge arsenal of weapons, equipment, and vehicles, and its gigantic player counts, then PUBG is probably another game worth trying out. A battle royale game, PUBG drops players onto a giant map, and they try to become the last person or team standing. Like Battlefield, the game requires skill, persistence, and strategy for success.

If you’re a fan of Battlefield’s trademark large-scale multiplayer, you might enjoy Squad, the military shooter from developer Offworld Industries. The first-person shooter released in 2020 and puts a focus on team play and communication, with squads that work together and coordinate often having the most success. The 50v50 game has 20 multiplayer maps, vehicles, and a variety of vehicles to help you get around. There are a number of military factions to join, including the US Army, Russian Ground Forces, Canadian Armed Forces, the Middle Eastern Alliance, and the British Army, among others.

Also developed by DICE, Star Wars: Battlefront II is a phenomenal sci-fi shooter featuring a huge roster of giant maps that successfully captures the feeling of being part of a giant Battlefield-like war. There are many different character classes to choose from, also like Battlefield, which allows you to play the game how you want and tailored to your style. DICE very clearly took lessons and feedback from Battlefield for Battlefront, and it turned out great.

Valve’s Team Fortress 2 might have been released back in 2007, but the game is still thriving today and it’s, simply put, a well-made team-based shooter that is a helluva lot of fun. The lighthearted, colorful shooter pits two teams against each other in objective-based game modes on a variety of maps. There are numerous character classes to choose from, including a sniper and an engineer, and teams that are successful usually work together and strategize to win.

2015’s Verdun is a World War I shooter not unlike DICE’s own Battlefield 1. The game supports 32v32 multiplayer matches set on maps based on real-world battlefields of the First World War in places like France and Belgium. The game aims for realism with its arsenal of authentic World War I weapons, clothing, and gear, and there are a variety of modes to try out. If you enjoy Verdun, there is a standalone expansion called Tannenberg, and a sequel, Isonzo, in the works.