It also comes with an external switch as standard and cool blue leads. One of the world’s best Xbox modchip on the market. The Xecuter 2.6 modchip allows the user to play import and backup games on their XBOX console. Compatible with all Xbox machines from all regions (USA, JAP, PAL) including the new v1.6b.

The Xecuter 2.6 CE does work with the Xbox version 1.6b consoles. It includes the LPC rebuild kit for the 1.6 consoles at no added cost to you. Please do note that there are two Cromwell versions flashed onto the 2.6 chip. If you own a 1.6b console, please try both Cromwell banks to see which bios version works well for you. 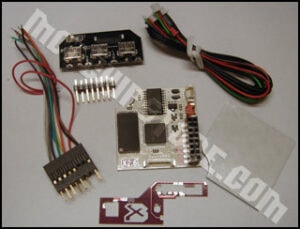 Be the first to review “Xbox Official Xecuter 2.6 CE ModChip. Works with ALL Xbox Versions 1.0-1.6b!” Cancel reply