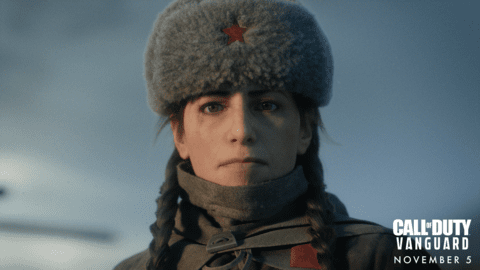 The developers start by saying, “Vanguard’s campaign is a story about a group of diverse soldiers who put aside their differences for a common cause: stopping a secret Nazi plot in the final days of WWII. Their mission also represents the origins of a new kind of combat unit that moved and fought unlike anyone before it: the Special Forces.”

The first operator mentioned is the previously introduced campaign operator Arthur Kingsley, who serves as the leader of Vanguard’s Special Operations Task Force. Kingsley is described as being smart and charismatic, as well as brave and heroic.

“The fear of losing soldiers under his command made Arthur reluctant to lead, but the mission’s importance led him to accept his role and embrace his true calling.”

The developers also say that they wanted his background to be unique, and they worked with numerous cultural and historical consultants to give Arthur a distinct origin. Kingsley is highlighted as being born in Cameroon, educated in England, and serving as a British paratrooper for most of the war. The developers also share that Kinglsey was the character they conceived first.

The second operator is the previously introduced Polina Petrova, who is a member of Kingsley’s Task Force sent into Germany. She’s described as an infamous sniper of legend, who was feared by the Nazis and idolized by the Russian soldiers who fought to defend their home. The developers describe Polina’s story as having intense emotional threads about loss, displacement, grief, but also prejudice.

The developers say they learned about the women who fought on the Eastern Front during pre-production research, including the details of female snipers who fought against the Nazis.

“We knew we wanted to feature a character who took inspiration from all of the brave women who fought and died to protect their home. Once we had settled on Stalingrad as a setting for her levels, the character of Polina started to take shape.”

The third operator introduction is Daniel Take Yatsu, who is a character found only in multiplayer. Daniel is described as a sniper and a protector, who uses his marksmanship to support his fellow soldiers.

The developers also elaborated on his background by saying, “His story is also deeply rooted in one of the most shameful chapters of American history: the internment of Japanese citizens in US concentration camps during WWII. Daniel’s entire world was torn apart when his family was sent to the camps, and like many Japanese Americans, he was drafted into the army to protect a nation who did not consider him an equal citizen.”

And finally, Padmavati Balan is another multiplayer-only operator. She is described as a character who lost her homeland twice: once to colonialists and then to fascists. The developers describe Padmavati as a fierce soldier adept at jungle warfare and also a battle-weary nurse who loves to perform poetry and music, which makes her character defined by the duality between being a fighter and a peaceful civilian.

“Because she understands the true costs of spilled blood, she eschews a romantic view of warfare, but won’t hesitate to demonstrate courage and leadership on the battlefield when called. She dreams of an India whose fate is determined by the will of its own people and is convinced that they will one day prevail.”

These four highlighted characters are just a few of the many that players will meet in Vanguard’s campaign and multiplayer modes. Call of Duty: Vanguard launches on November 5 for Xbox Series X|S, Xbox One, PS4, PS5, and PC. The game will support both cross-play and cross-progression, and players will be able to play with friends on multiple platforms when the game released.

Call of Duty: Vanguard will launch as Activision Blizzard faces a lawsuit from the state of California over alleged harassment and discrimination against women.