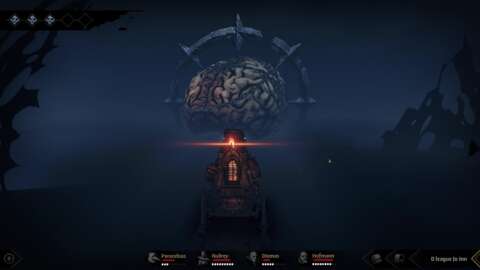 The journey to defeat evil in Darkest Dungeon II seems to be as much an interior battle as an exterior one. You not only need to fight off hideous cosmic horrors, but keep the minds of your heroes from breaking as they succumb to the horror and dispair all around them. The metaphor of fighting internal evil starts with the name of Act 1, Denial, and ends with its final boss: a giant brain literally covered in chains.

Defeating the boss–or rather, the four evil, magical padlocks covering it–is tough, mostly because of the special abilities the locks bring to bear against your team. They also have big health pools that can make whittling them down pretty difficult. Knowing where to focus your efforts and with what attacks, however, can go a long way, as can managing your team’s Stress levels to keep them in fighting shape.

Here’s everything you need to know to defeat the Brain and complete Act 1. If you want more on how to survive your runs, check out our Darkest Dungeon II beginner’s guide.

Each of the four evil padlocks in this fight has different weaknesses, so select the right characters and abilities to take on each one.

The final challenge of Act 1 is defeating a brain shackled by four padlocks. Each of the locks is a character that will attack your team, but what you really need to worry about is each one’s particular debuff. Once per round, one of the padlocks will afflict your team with a “Denial” debuff, which locks your ability to use certain kinds of skills. Denials will stop you from healing Stress, using ranged attacks or melee attacks, and healing.

It seems that the Denial attacks are on a rotation starting at the far right of the group and moving left, so you can try to plan for them ahead of time by moving your characters around to circumvent them:

In addition to expecting each Denial attack and planning to use different abilities while they’re in play, you can also try to focus your fire on whatever lock you think is making things worst for you. For instance, the lock in the second position, the Latch of Regret, can mess up most of your teammates with its Denial of Arms ability, but you’ll have three full rounds to wail on it before it uses it. That might give you enough time to destroy the lock if you focus your fire, avoiding its Denial attack altogether.

Each of the locks carries 75 health points, so you’ll need to hit them with some sustained strikes to finish them off. That means you’re going to want to focus on one lock and keep pummeling it to destroy it before moving onto another one, so plan your attacks accordingly, taking Denials into account. You’ll also want to check each lock’s resistances–they’re all strong and weak against different things, including Blight, Bleed, and Burn attacks. Use the right kind of attack against the right lock, and you can defeat it much more easily than if you spread your attacks around without paying attention.

Here’s a rundown of each lock’s resistances–the lower the number, the weaker they are to that effect.

The numbers give a good sense of how you want to focus your attacks. For the first enemy, the Padlock of Wasting, Debuff attacks are a good idea, but you’re mostly going to want to lean on strong melee strikes, as others are a lot less effective. The Latch of Regret is weak against Blight and Burn. The Bolt of Lamentation can easily be made to Bleed and Burn, and the Shackle of Despair is weak to Bleed, but both Blight and Burn will likely be effective as well. In all cases, if you’ve got Stun attacks, you probably want to lay off them altogether.

You’re going to want to pack any Trinkets, abilities, and Combat Items that can give you protection from Stress damage, as most of the locks’ attacks will also mess with your characters’ minds. Stress is your biggest problem in Darkest Dungeon II, especially in this battle–if your characters start having Meltdowns, they’ll lose any relationship bonuses they had and lose almost all of their health. Stress management might be even more important than health management in this fight.

Compose your team as you see fit, but it’s probably a good idea to bring characters with a mix of abilities, and the Plague Doctor is a must. Be sure to use a Mastery point to power up Ounce of Prevention ahead of time, which can be used to heal your entire team’s Stress damage.

As for the rest of your team, use what you’re comfortable with, but make sure you’re prepared to hammer a single lock with the best abilities you can in order to destroy it as quickly as possible. The Hellion is good for inflicting Bleed, while the Plague Doctor and Grave Robber are good for Blight, and the Runaway can dish out Burn attacks. If you’ve got the Jester, he also has an ability useful for clearing out Stress damage.

Keep up the pressure and manage your Stress, and you should be able to slowly whittle down each padlock and destroy it. With each lock defeated, the battle should get easier as you remove Denials from the rotation. Careful play and a little luck should lead you to victory, allowing you to free yourself from denial once and for all.